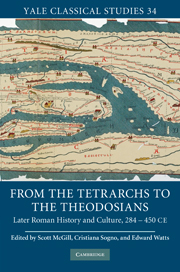 From the Tetrarchs to the Theodosians
Later Roman History and Culture, 284–450 CE