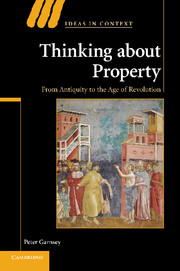 Thinking about Property
From Antiquity to the Age of Revolution