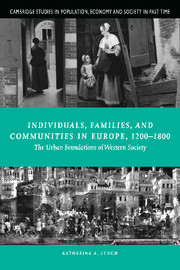 Individuals, Families, and Communities in Europe, 1200–1800
The Urban Foundations of Western Society