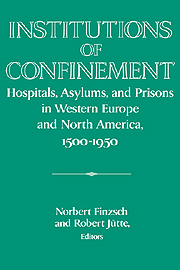 Institutions of Confinement
Hospitals, Asylums, and Prisons in Western Europe and North America, 1500–1950