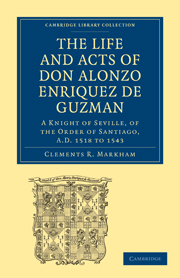 The Life and Acts of Don Alonzo Enriquez de Guzman: A Knight of Seville, of the Order of Santiago, A.D. 1518 to 1543
Translated From an Original and Inedited Manuscript in the National Library at Madrid, With Notes and an Introduction