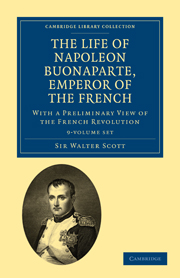 The Life of Napoleon Buonaparte, Emperor of the French
With a Preliminary View of the French Revolution
9 Volume Set