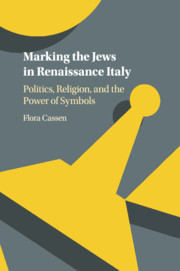 Marking the Jews in Renaissance Italy
Politics, Religion, and the Power of Symbols