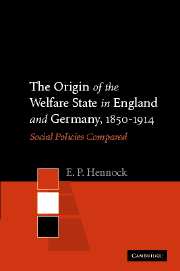 The Origin of the Welfare State in England and Germany, 1850–1914
Social Policies Compared