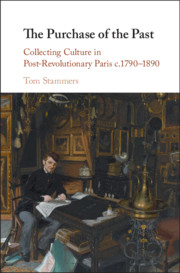 The Purchase of the Past
Collecting Culture in Post-Revolutionary Paris c.1790–1890