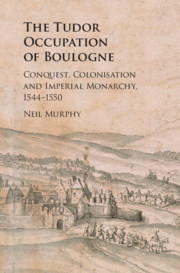 The Tudor Occupation of Boulogne
Conquest, Colonisation and Imperial Monarchy, 1544–1550