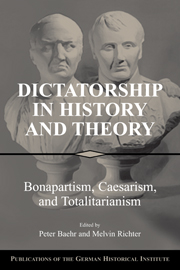 Dictatorship in History and Theory
Bonapartism, Caesarism, and Totalitarianism