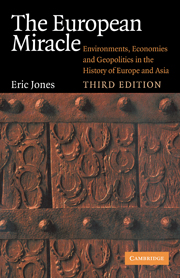 The European Miracle
Environments, Economies and Geopolitics in the History of Europe and Asia