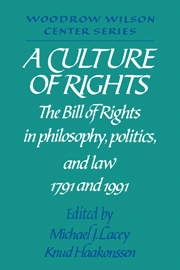 A Culture of Rights
The Bill of Rights in Philosophy, Politics and Law 1791 and 1991