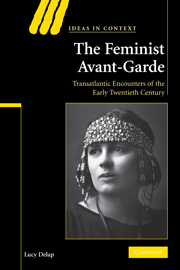 The Feminist Avant-Garde
Transatlantic Encounters of the Early Twentieth Century