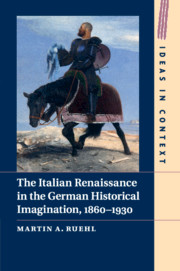 The Italian Renaissance in the German Historical Imagination, 1860–1930