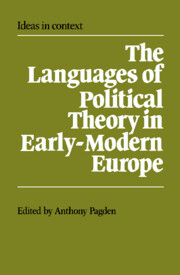 The Languages of Political Theory in Early-Modern Europe