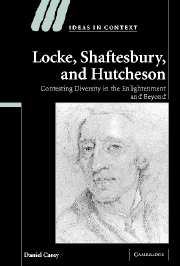 Locke, Shaftesbury, and Hutcheson
Contesting Diversity in the Enlightenment and Beyond