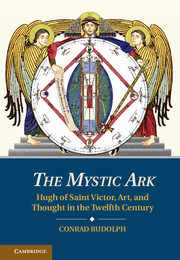 The Mystic Ark
Hugh of Saint Victor, Art, and Thought in the Twelfth Century