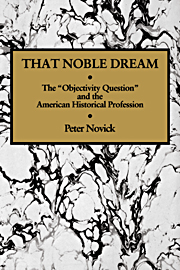 That Noble Dream
The 'Objectivity Question' and the American Historical Profession