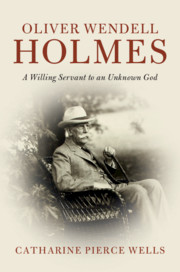 Oliver Wendell Holmes
A Willing Servant to an Unknown God