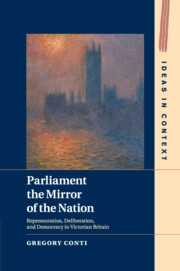 Parliament the Mirror of the Nation
Representation, Deliberation, and Democracy in Victorian Britain