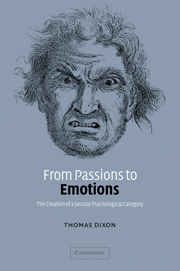 From Passions to Emotions
The Creation of a Secular Psychological Category