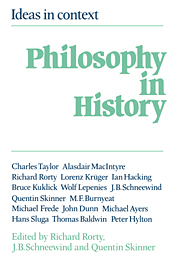 Philosophy in History
Essays in the Historiography of Philosophy