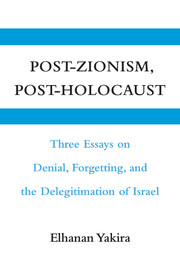 Post-Zionism, Post-Holocaust
Three Essays on Denial, Forgetting, and the Delegitimation of Israel