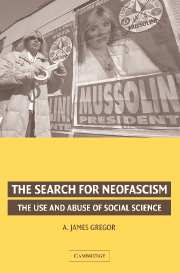 The Search for Neofascism
The Use and Abuse of Social Science