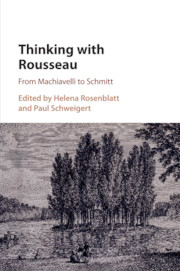 Thinking with Rousseau
From Machiavelli to Schmitt