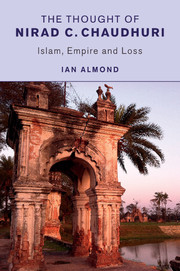 The Thought of Nirad C. Chaudhuri
Islam, Empire and Loss