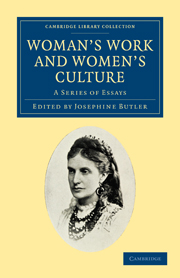 Woman's Work and Woman's Culture
A Series of Essays