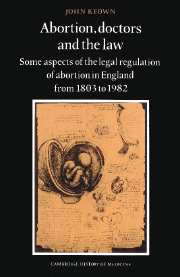 Abortion, Doctors and the Law
Some Aspects of the Legal Regulation of Abortion in England from 1803 to 1982