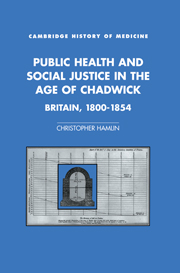 Public Health and Social Justice in the Age of Chadwick
Britain, 1800–1854