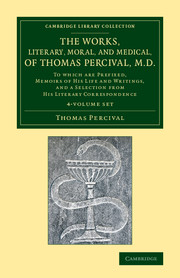 The Works, Literary, Moral, and Medical, of Thomas Percival, M.D.
To Which Are Prefixed, Memoirs of his Life and Writings, and a Selection from his Literary Correspondence
4 Volume Set