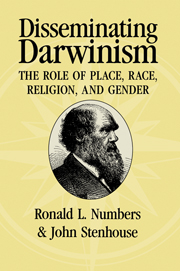 Disseminating Darwinism
The Role of Place, Race, Religion, and Gender