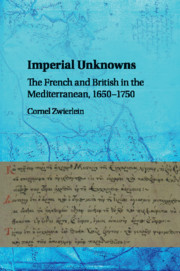 Imperial Unknowns
The French and British in the Mediterranean, 1650–1750