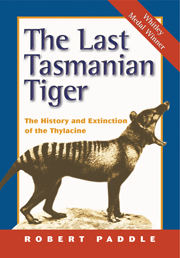 The Last Tasmanian Tiger
The History and Extinction of the Thylacine