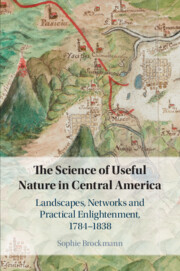 The Science of Useful Nature in Central America
Landscapes, Networks and Practical Enlightenment, 1784–1838