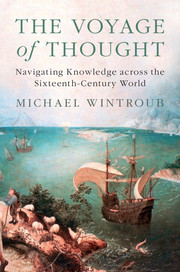 The Voyage of Thought
Navigating Knowledge across the Sixteenth-Century World