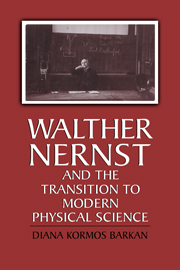 Walther Nernst and the Transition to Modern Physical Science