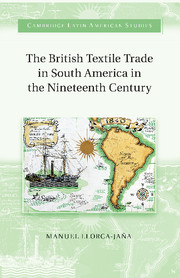 The British Textile Trade in South America in the Nineteenth Century