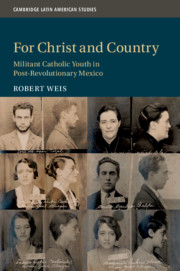 For Christ and Country
Militant Catholic Youth in Post-Revolutionary Mexico