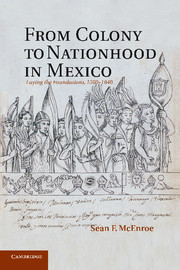 From Colony to Nationhood in Mexico
Laying the Foundations, 1560–1840