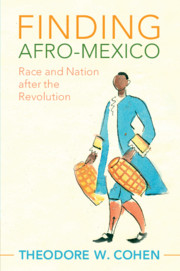 Finding Afro-Mexico
Race and Nation after the Revolution