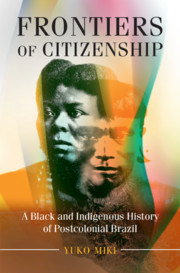 Frontiers of Citizenship
A Black and Indigenous History of Postcolonial Brazil