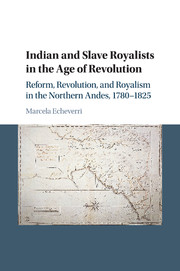 Indian and Slave Royalists in the Age of Revolution
Reform, Revolution, and Royalism in the Northern Andes, 1780–1825