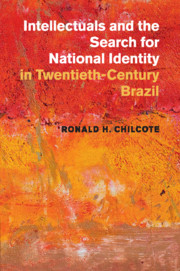 Intellectuals and the Search for National Identity in Twentieth-Century Brazil