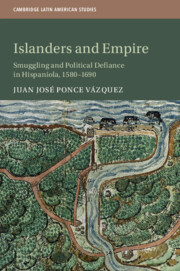 Islanders and Empire
Smuggling and Political Defiance in Hispaniola, 1580–1690