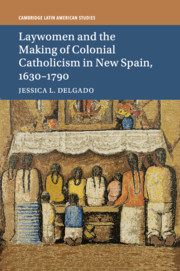 Laywomen and the Making of Colonial Catholicism in New Spain, 1630–1790