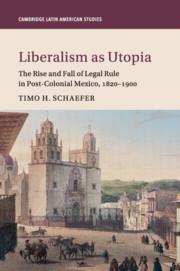 Liberalism as Utopia
The Rise and Fall of Legal Rule in Post-Colonial Mexico, 1820–1900