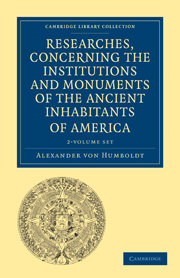 Researches, Concerning the Institutions and Monuments of the Ancient Inhabitants of America with Descriptions and Views of Some of the Most Striking Scenes in the Cordilleras!
2 Volume Paperback Set