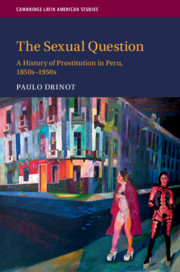 The Sexual Question
A History of Prostitution in Peru, 1850s–1950s