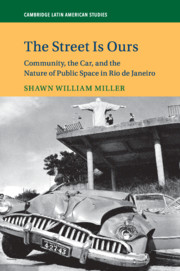 The Street Is Ours
Community, the Car, and the Nature of Public Space in Rio de Janeiro